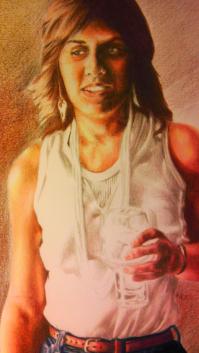 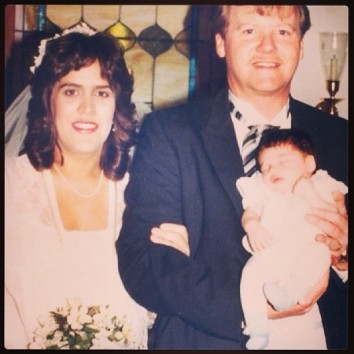 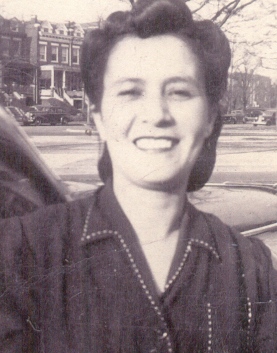 “Question Authority” is a catchy mantra for someone in college. With the perspective of age, though, I wonder about the difference between questioning and challenging authority. Where do we draw the line, and where does it become illegal, i.e. harmful to society? 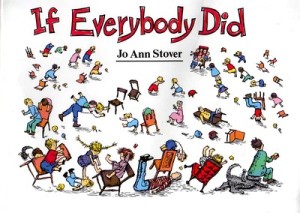 A 1960 picture book etched into my brain, written and illustrated by Jo Ann Stover.

A favorite childhood book of mine, If Everybody Did by Jo Ann Stover — which, I realize now, formed the basis of my morality education at age 2 — posits a variation of the “jump off a cliff” refrain of parents: “What if everybody did?”

In other words, it might not hurt for me to litter my gum wrapper, but on the next page it would say, “What if everybody did?” and there would be a sea of gum wrappers, choking out all life and loveliness. Or, whom would it hurt if I spilled some tacks? Next page: This is what would happen if everybody did, and there would be people crying out in pain stepping barefoot on all the tacks. (Bonus lesson: It taught me the value of individuality, to not mindlessly follow the crowd. A bargain for a picture book priced today at $7.99.)

In my last post on Anonymous’ Nov. 5 threat against Facebook (not really a book), it wasn’t my intention to credit or blame the website as the sole driver of either social networking or flash mobs. Facebook simply gives a face to the phenom of society moving online. And The Social Network helped cement its marketing brand, although Facebook creators themselves staged a protest over that Oscar-winning spin.

More and more, as Facebook becomes the portal for Americans’ online experience — how many of you have it set as your “home” page? — the idea of any disruption of service starts to feel like a home invasion by people in freaky V for Vendetta-inspired Guy Fawkes masks.

Anonymity in the age of the Internet seems an oxymoron. Yet this loosely knit group of hacktivists thinks it knows enough to cover its tracks while it punishes the rest of us for being victims of sketchy privacy policies — for being naive or ignorant or, worse, too trusting.

Although I don’t condone hacking or theft, if you bother to read the available manifestos on Anonymous’ “OpFacebook,” the group’s ends, if not their means, do border on noble-sounding: A sampling:

For me, the jury’s still out on whether Anonymous is composed of freedom fighters or terrorists. Maybe Netflixing V for Vendetta would provide insight; alas I fear it, like this blog, offers more questions than answers. 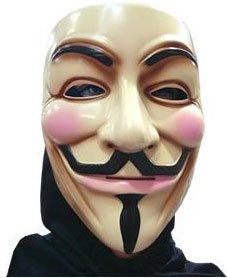 A Guy Fawkes mask. Guy Fawkes Day celebrates the day a British zealot was arrested, after his plot to blow up Parliament in 1605 was thwarted.

If I were Anonymous — and I’m far from it, just an overexposed blogger chick — I wouldn’t use as my default (profile picture) the face of a religious nut who sought to decimate the so-called reasonable representatives of the masses.

Is Anonymous’ true goal to get us to leave Facebook, to force positive change in its boardroom, or to destroy it — and online society — as we know it?

And, more important, what can I do to protect myself and my family? Even if I deactivated my account, it would be too late — my Facebook footprint is permanent and owned by a corporation. Hmm. Maybe it would be in my best interests if all that were destroyed.

(In Part 2, we revisit our hero, Burgess Meredith, after the dastardly, senseless hydrogen bomb attack in Twilight Zone.)

On the bleat beat: Hackltivism BAAAAAAAAAD! (Image by James Good via Flickr)

Trembling, I type, joining a herd of quivering bloggers discussing Anonymous’ revolving threat to “kill” Facebook on Nov. 5. That would be Guy Fawkes Day, which honors a British zealot who in 1605 was thwarted in a plot to blow up Westminster Palace and the politicians meeting within.

Still, I’m having trouble sorting out the “sides” in what seems a battle for cyberspace dominance lately. As a journalist, I thought “free speech” was always the good guy. Yet online, the idea seems in test mode, as social-media conflagrations blur lines of good and evil. 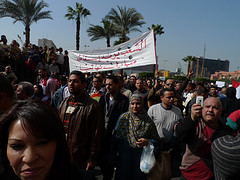 Egypt sets off a chain reaction.

Take the increasingly popular “flash mob.” Once a vehicle for creativity and building community — e.g. stopping time in Times Square — it logically morphed into a tool of protest, e.g. Operation Hey Mackey, which took root in September 2009 at an Oakland Whole Foods to spotlight the “green” giant’s CEO’s seemingly hypocritical stance on health care.

Then from protest to revolution: Facebook famously provided the grid for the Mideast uprisings sown in Egypt in January, spreading democracy … we think. Taken to the extreme, flash mobs are becoming synonymous with crime — enter the looting gangs in Philadelphia and suburban D.C.

Can anarchy be far behind?

This past week, it looked like anarchy in San Francisco. Good vs. evil got blurrier as outrage over the July killing of a homeless man by Bay Area Rapid Transit system police escalated into scuffling protests that were, interestingly, incited by Anonymous and fueled by Facebook (on the same side?). In response, police shut down wireless access, clamping free speech — a blanket punishment to avert a blanket attack, confusing all of us about whose side the “authorities” are even on, and prompting compounded protests.

Confounding matters: Each “side” tries to blame the media for distorting its message … but who can even tell where media begin and end anymore? The “spin” on the Web is running rampant. I like to think of the news media as on the sidelines, as not having a side … but perhaps that exposes my naivete.

Here are two video messages representing two sides in the BART conflict. First, from “BART TV” — who knew? everyone has a channel! — with its “safety first” and “we’re doing this for your own good,” Brave New World feel:

Compare that to this creepy message from Anonymous:

Privately, what makes me laugh is: At some level, we are all on the same side — wanting to be safe, free in speech and will, and at times just left alone in peace and anonymity.

(For your sidebar entertainment, here is a man terrorized both at work and in his own home for exercising his free speech right to read: Burgess Meredith, in Part I of a classic Twilight Zone episode.)